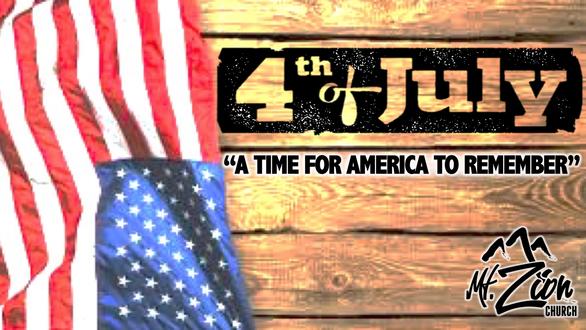 My friends, proper equipment in life demands a good memory, likewise the ability to forget. All of the blunders, murmurings and fault findings unjustly made ought to be forgotten, but the fear of Moses was they might forget the God who had led them all the way, who had fed them with manna, bread from heaven, and who had caused their garments not wear out, nor their feet to swell.  The nation of Israel was a chosen nation and had a close relationship and fellowship with God that no other nation before or since has had, except the Christian nation which is the Church of Christ.  However, I would like to suggest that there may be a parallel in various ways to this wonderful bit of history. Some have called America a child of providence. I am inclined to agree with those thinkers who believe the founding of the United States of America was providential and that God had a hand in it.  This is not to say that America is a chosen nation like Israel, but it is to say that possibly there was a guiding hand in the history of America, one of the greatest countries on earth-- whose motto is, "one nation under God with liberty and justice for all.".